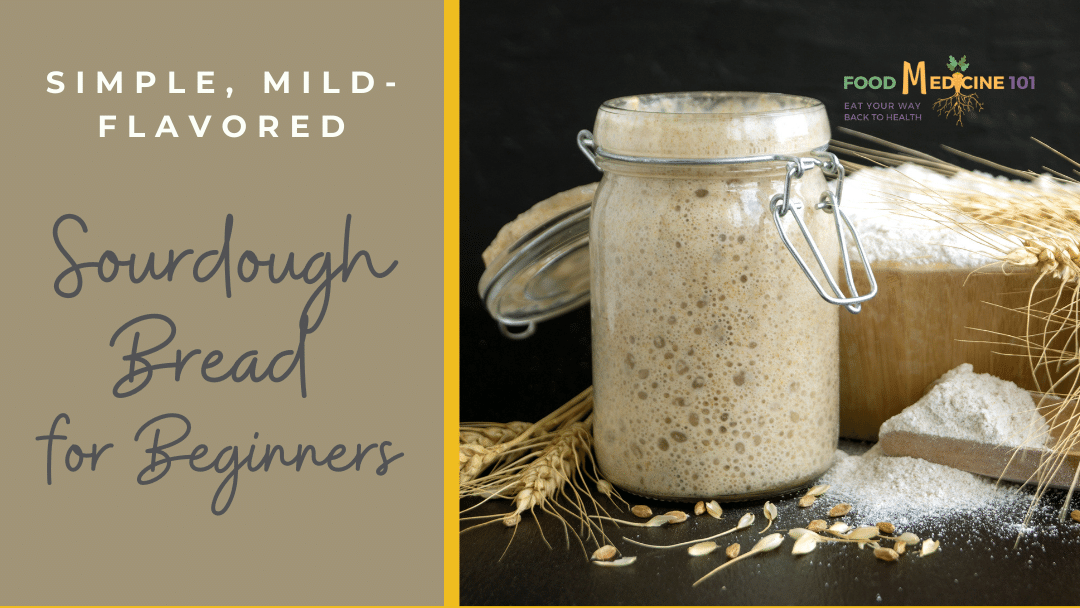 The first time I tasted my friend Lisa’s homemade sourdough bread, I was shocked. “This doesn’t taste sour!” I said in disbelief. I had tried on and off for years to bake my own sourdough, but I could never get a good, mild-flavored loaf.

She was generous enough to share both with me and I’ve been successfully baking my own sourdough bread ever since.

This bread has been a life-saver for my husband who has an autoimmune disease called psoriatic arthritis. We learned a few years ago that wheat causes severe arthritis pain for him. But he eats this whole wheat sourdough every day without any joint pain.

What is Sourdough Bread?

Sourdough bread is a method more than a flavor. There are two main differences between making sourdough bread and “regular” bread.

Starter in Place of Yeast

First of all, in place of the commercial foil packets of dry yeast, you add a generous scoop of natural sourdough “starter”.

Sourdough starter is simply a mixture of flour and water, that left at room temperature will develop a natural population of probiotic yeast and bacteria that make it bubble and expand and “rise” the bread dough. Once this starter culture is established, you’ll use a portion of it over and over again in your bread-making, and feed the unused portion a roughly 60/40 ratio of flour and water to keep the starter culture thriving and happy.

Second, sourdough requires a much longer fermentation and rise time, although not any extra hands on time. In fact, I think it takes less kneading (the hardest part), so I feel like I spend less time making sourdough bread than commercial yeast bread.

Tips for a Less Sour Starter

This bread recipe really is not very sour. This is partly because my sourdough starter is healthy and mild-flavored. But I think there is some magic in this recipe too, because the bulk of the flour doesn’t ferment for very long. (The downside is that this bread may not ferment long enough to be gluten free for those with Celiac’s or gluten intolerance.)

A couple of tips to keep your starter active, thriving, and mild-flavored:

Sourdough bread is awesome for so many reasons. It’s the perfect compromise between whole-grain proponents and grain-free advocates because:

Check out this article for all the benefits of natural sourdough yeast starter.

I also cover where to buy sourdough bread in this article. But the safest option if you want to try sourdough bread, especially if you have a serious reaction to wheat or gluten, is to make it yourself.

I know it can seem a little intimidating to bake your own bread, let alone sourdough bread with a starter. I’m no bread-baking expert nor food scientist, but I promise this recipe is easy and turns out great for me pretty much every time. I’ll share a bit of what I’ve learned making my own bread.

Kneading is my least favorite part of baking my own bread. But I’ve learned it doesn’t seem to matter if I knead this sourdough recipe a lot or a little. It turns out great either way.

I believe that the long fermentation and rise times help develop the gluten naturally without a lot of physical manipulation.

This is great because it means you don’t need a bread machine or Bosch mixer to knead the bread for you. It’s really not much extra effort to knead it yourself for a minute or two.

I used to employ the services of a Bosch mixer, but I started making 6 loaves a week, and couldn’t fit it all in the mixer I had, so now I make it by hand. It’s been fine. Really- and I’m a lazy cook. If I can do it by hand, so can you!

Use Oil Not Flour!

This is very important for the gluten-intolerant! When you are kneading and shaping your bread, make sure you coat your hands and counter with coconut or olive oil, NOT flour! That way you are not adding flour to your final bread product that hasn’t been in contact with the starter culture for several hours to ferment.

So far I’ve made this recipe using white flour, whole wheat flour, and whole grain spelt flour. It turns out great with any of those. I assume you could try other gluten-containing flours… but I  haven’t done it myself.

If you try a different flour, leave a comment and let us know how it goes!

Sourdough requires an overnight ferment, and then 3 rising times throughout the next day, totalling about 5 hours. So more rising time than bread made with commercial yeast.

One great thing about sourdough is you don’t have to be super strict with how long you let it rise. Depending on what I’m busy with, I may let it rise longer than the times listed on the recipe. You do want to be careful not to let it rise too much on the final rise in the bread pans though, otherwise it will overflow and make a mess!

Just remember, the warmer the room temperature, the more active your starter culture will be and the faster it will rise. The cooler the room, the slower the rise time.

Also be sure not to let your dough dry out while it’s rising. Keep it covered with a wet towel (make sure to re-wet it as needed through the day) or plastic wrap.

If You Have a Bad Reaction

If you have a serious gluten or wheat intolerance and find this bread STILL causes symptoms for you, don’t give up hope! The final flour added in this recipe is only in contact with the starter culture for about 5 hours. That may not be enough time to adequately break down the gluten.

Now obviously I don’t have the equipment to test gluten levels in my home, but the studies I’ve read that resulted in gluten-free levels in the sourdough bread probably used longer fermentation times.

So… here is my recommendation: find a recipe that adds ALL of the flour at the beginning to allow it to be in contact with the starter culture for 12-24 hours. The longer the better to give the natural yeasts and bacteria in the starter plenty of time to digest that gluten for you. Several studies have found sourdough bread to be gluten free, so don’t give up hope you can enjoy REAL gluten free wheat bread again some day.

I plan to experiment with such a recipe soon, and when I find a good one that works well for us, I will be sure to share it! If you have a great recipe, please share it in the comments!

Without further adieu, here is Lisa’s super simple sourdough bread recipe. This is an easy, delicious recipe to get your feet wet with sourdough baking and gain some confidence.

And if you feel good eating it, it may be the only sourdough bread recipe you’ll ever need! 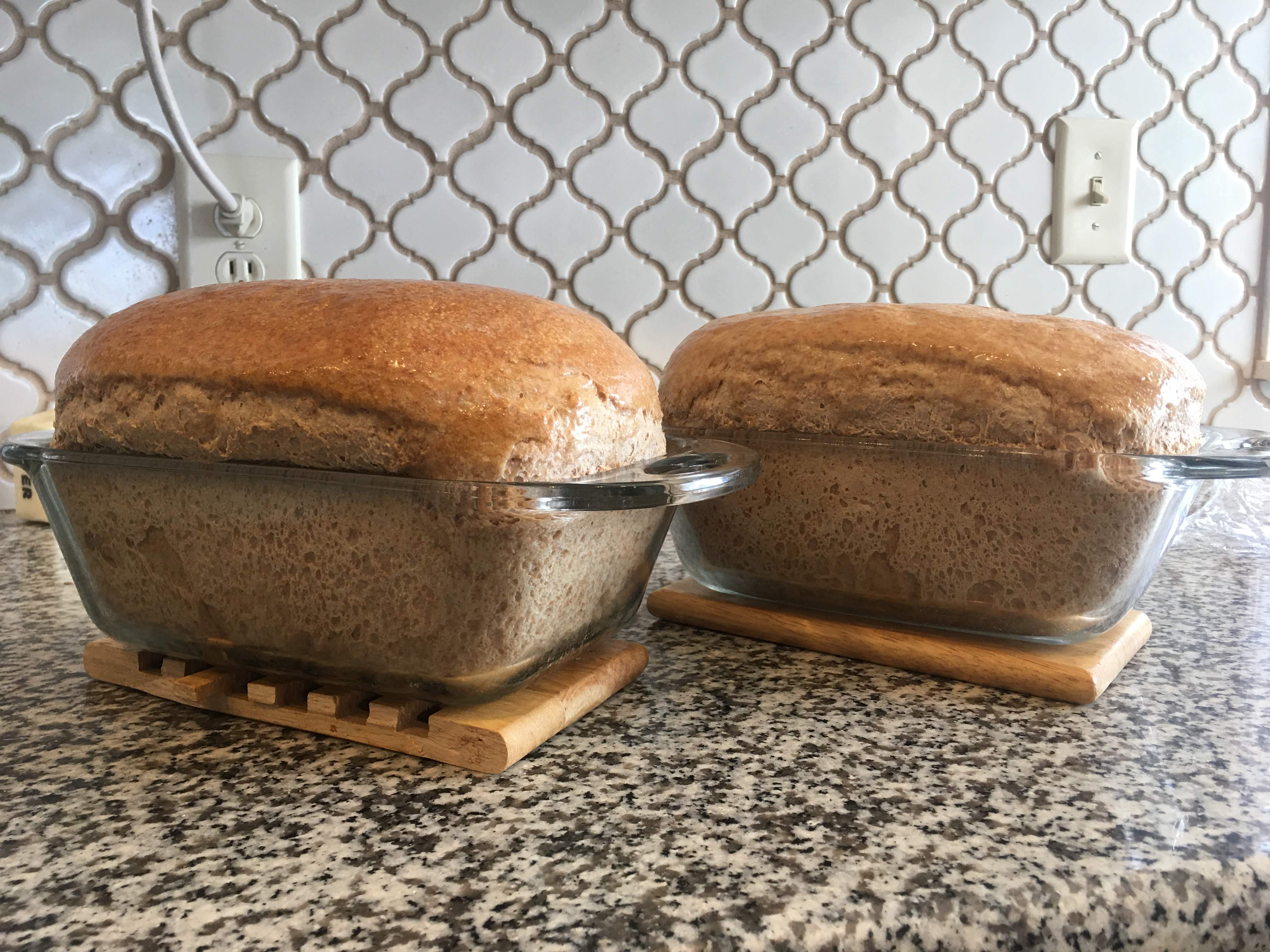 The warmer the room, the faster your bread will rise. Prevent your dough from drying out during rising by keeping it covered with a wet towel or plastic. This is a great starter recipe, but if you are gluten-intolerant, try a recipe that adds all the flour in the first step, and allows it to be in contact with the starter for at least 12-24 hours before baking. This will ensure you end up with a gluten-free bread.

Did you try it? Leave a comment and let me know how it went! I’d love to hear!